By Lieutenant-Colonel Paul Thobo-Carlsen (Retired), CMPA Director of History & Heritage
It is fairly well known that Canada operated several military bases in West Germany during the Cold War to help NATO deter and respond to potential Soviet aggression. However, it is less common knowledge that we also operated two air bases and several other units in France during the early stages of this protracted standoff between NATO and the communist Warsaw Pact bloc. Royal Canadian Air Force (RCAF) service police played an important role as part of Canada's NATO contribution in France. ​
No. 1 (Fighter [F]) Wing initially operated from a temporary base in North Luffenham, England beginning in November 1951, but was working from its new home in Marville by March 1955. No. 2 (F) Wing began operating from the hastily built Grostenquin air base in October 1952. No. 3 (F) Wing started operations from its base in Zweibrücken, Germany in March 1953. Finally, No. 4 (F) Wing took over the former French airfield in Baden-Soellingen, Germany in September 1953 after construction delays prevented it from using the ​original Pferdsfeld location. Several other RCAF units were established in the Metz area, including the RCAF Support Unit, Combat Operations Centre, 61 Aircraft Control & Warning (AC&W) Squadron and 6 Tactical Aircraft Control Centre.[1]
In early 1952, the RCAF police organization began a series of changes that included a newly reorganized Directorate of Air Force Security at Canadian Forces Headquarters, an increase in establishment of 40 officers and 200 non-commissioned personnel, and a restructuring of the former Service Police mustering into a new Air Force Police (AFP) trade.[2] These changes were driven in part by the need to provide robust police and security support for the RCAF's new overseas NATO bases.

A separate Air Force Police Section was formed under the Headquarters Administrative Unit (and later transferred to the RCAF Support Unit, Metz) to provide first-line police and security services to the headquarters staff and various other RCAF units located in the Metz area. Operating from a guardhouse beside the main gate, these AFPs controlled access to and patrolled the installation, provided physical and personnel security advice and services, and conducted police activities to help deter, detect and investigate crimes, services offences and traffic accidents.
In 1953, the complexity of certain criminal investigations and counter-intelligence activities within the 1 Air Div area of operations saw the attachment of two special investigators to the SO Secur staff: a Sergeant and a Corporal. This was later expanded to a stand-alone Special Investigation Detachment under the command of a commissioned RCAF Security Officer.[4]

Main gate to RCAF Station Grostenquin, France, circa 1959-60. Building in centre is the Air Force Police guardhouse. (Photo: DND)
RCAF Station Grostenquin was the first Canadian flying base to operate in France—beginning in October 1952. Home to 2 (F) Wing, it initially comprised three squadrons of Canadair CL-13 (F-86 "Sabre Mk. V") day fighters along with the base support elements. In 1956, one of these flying squadrons was re-equipped with Avro CF-100 "Canuck"  all-weather fighters.
Grostenquin was​ not an ideal location for an airfield due to its flood-prone topography, and the construction necessary to accommodate the Canadians was rushed in order to meet the NATO-imposed timeline to get the RCAF squadrons--with their state-of the-art Sabre Mk. V fighters--operating. Many buildings at the station were relatively flimsy pre-fabricated structures, and even those constructed on-site were made to building standards well below the Canadian norm. The early years in Grostenquin were marked by challenging working and living conditions, and lots of mud.
RCAF Station Grostenquin eventually fell victim to international politics. In 1963, the flying squadrons at Grostenquin began receiving their new CF-104 "Starfighter" aircraft in preparation for a new nuclear strike role within NATO. However, President De Gaulle's government announced a new policy whereby all nuclear weapons on French soil would have to fall under its control. As this was unacceptable to Canada, the United States and the other NATO nations based in France, the Canadian government decided to relocate its planned nuclear strike capability to West Germany. Only conventionally armed and unarmed photo-reconnaissance versions of the CF-104 were flown from Grostenquin and Marville until their eventual closures. RCAF Station Grostenquin was officially deactivated on 1 August 1964, while Marville remained active for several more years as the main operating base for two CF-104 photo-reconnaissance squadrons. 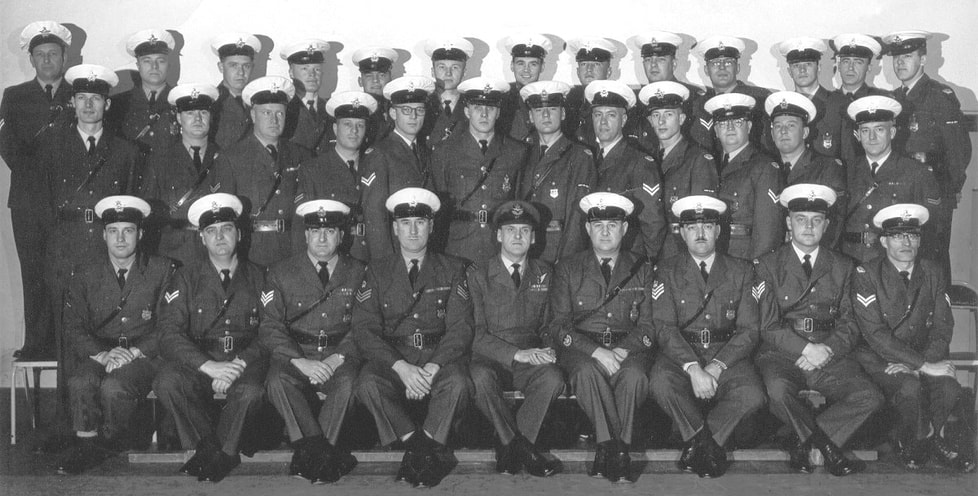 Air Force Police vehicles in front of the guardhouse at RCAF Station Marville, France, 1957. (Photo: Unknown)
A detachment of French "Gendarmes de l'air" also provided support to the Marville air base.[10] The full nature of their role is unclear, but their duties are known to have included passport control at the 5 AMU air terminal and jointly investigating traffic accidents on base along with the AFPs.
An interesting story about Marville was provided by retired military policeman Doug Scott.[11]  Doug was posted to Marville as an AFP in 1963, and when he arrived there was a German Shepherd dog attached to the Air Force Police Section. His name was Butch, and he was employed as a guard dog at the ammunition compound, which was located in a forested area a few kilometres from the air base. During the day Butch was kenneled next to the AFP Guardhouse, but at 4 p.m. each afternoon he accompanied the AFP assigned to guard the ammo dump and remained there for the next 16 hours (two 8-hour AFP shifts) until Armament Section staff arrived the following morning. Butch was let loose and patrolled the ammo compound area, and was trained to attack anything that approached or touched the fence. This apparently lead to the death of many local farm cats who strayed into the compound.
Doug Scott spent many off-duty hours drawing cartoons under his Scotty pen name for Marville's station newspaper, the Arrowhead Tribune. A number of Doug's cartoons featured Air Force Police themes, although he happily satirized all aspects of military life in the paper's "On the Lighter Side" section.
Doug was not the only cartoonist to feature the Marville Air Force Police. Belgian illustrator Albert Weinberg penned a cartoon book series from 1954 to 2010 based on a fictitious RCAF (and later Canadian Armed Forces) test pilot, Major Dan Cooper. Because Weinberg created his character for a continental European audience, these comics have never been published in English. Some of the early "Dan Cooper" comics used RCAF Station Marville as a backdrop, and at least one edition prominently featured the station's Air Force Police. Below are some examples from the French-language edition of Dan Cooper 13 - Le mystère des soucoupes volantes (Les Éditions du Lombard: 1969).[12]
Wienberg's "Dan Cooper" comics were published in several other European languages, such as the following clip from the Spanish version of this same edition—also depicting the Marville AFPs in action. 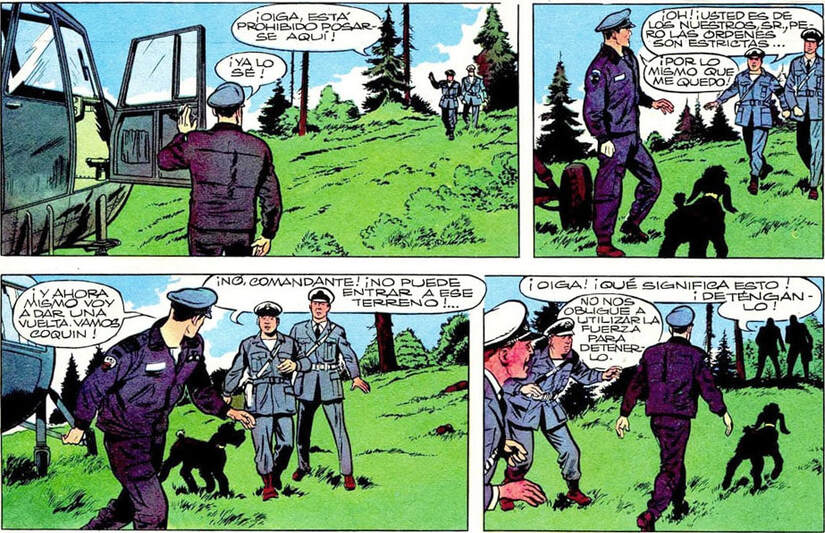 Back to reality...
​​In 1966 the government of France made a further policy decision to withdraw itself from NATO's command structure and required that all NATO units either leave France or fall under its national military command. A deal was made for the RCAF to take over the former French Air Force base in Lahr, West Germany and plans were quickly made to relocate 1 (F) Wing and its two remaining CF-104 photo-reconnaissance squadrons to that location. By April 1967, except for a small rear party, 1 Wing had vacated Marville.[13]