​A Brief History of the Canadian Military Police 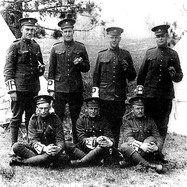 CPMC members, Camp Borden, 1916. (Photo: DND)
The Military Police Branch can trace its roots to the formation of the Canadian Military Police Corps (CPMC), which was authorized on September 15th, 1917 by Militia General Orders 93 & 94. Commanded by Major Baron Osborne, the initial establishment was set at 30 Officers and 820 Warrant Officers and NCOs within 13 detachments, designated No. 1 through No. 13.

Only trained soldiers were to be selected and they were required to serve a one month probationary period before being transferred.  Applicants were all required to have exemplary service records.

The CMPC School was formed in June 1918 near Ottawa in Rockcliffe, Ontario. The basic course was of three weeks duration; upon successful completion, Privates were promoted to Lance Corporal. The Canadian Military Police Corps was later disbanded on December 1st, 1920.​

C Pro C crest
Shortly after Canada's declaration of war on September 9th, 1939, the Commissioner of the Royal Canadian Mounted Police (RCMP) recommended to the Canadian Minister of Justice that a "Provost" company be formed from RCMP volunteers and used to provide military police support to 1 Canadian Infantry Division, the first expeditionary element to be deployed overseas since World War 1.

No.1 Provost Coy (RCMP), December 1939. (Photo: DND)
This unit, designated No. 1 Provost Company (RCMP), was the first of several military companies that would be formed and mobilized throughout the following months.  In early 1940, No. 2 Provost Company was formed as part of the 2nd Canadian Infantry Division.

​The C Pro C would continue to provide policing services to the Canadian Army until unification in 1968.  More detailed examination of C Pro C history can be found at the Canadian Provost Corps Association and the MP Virtual Museum.

RFFC Provost Marshal and staff in Toronto, circa 1918. (Photo: Unknown)
On February 1st, 1918, the Royal Flying Corps, Canada (RFCC) appointed an Assistant Provost Marshal and less than 50 officers and non-commissioned members to oversee discipline and security.  In April 1918, the Provost Marshal’s Office and Guardroom was opened in Toronto, Ontario, and was expanded to include detention rooms and police barracks in July of that year.
The RFCC gradually evolved into the Royal Canadian Air Force (RCAF) in 1924.  However, the small size of the force left little requirement for a policing service.  Instead, most security and policing duties were carried out by general duty NCOs under the authority of the Station Adjutant. This would change after the outbreak of World War 2. ​

An RCAF SP in England, circa 1944. (Photo: DND)
In March 1940, the 20-year old RCAF created its own security and policing organization with the appointment of its first Provost Marshal, Group Captain M.M. Sisley. He was initially authorized to form the Guards and Discipline Branch, the nucleus of which eventually became the Directorate of Provost and Security Services.

​More information about the Air Force Police can be found at the MP Virtual Museum.

In 1910, the Royal Canadian Navy (RCN) appointed Naval Police aboard its larger vessels, modeled after the branch created by the British Royal Navy in the late 1800s.  However, like the Army’s CPMC and the RFCC’s Provost Marshall, the Naval Police did not survive beyond 1920.

RCN Regulator, circa 1950. (Photo: DND)
During World War 2, the RCN had no integral police organization comparable to the C Pro C or RCAF Service Police; instead, the Navy relied upon a variety of organizations such as the Dockyard Police, local civilian police, and shore patrols to maintain security of establishments and maintenance of discipline.

​At sea, the RCN appointed "Regulators" from the Boatswain trade for discipline and policing, as well as a variety of Quartermaster duties.
For a more detailed history of policing in the RCN, visit the MP Virtual Museum.

On 26 March 1964, a white paper was tabled in Parliament by the Minister of National Defence that outlined a major restructuring of the RCN, Canadian Army, and RCAF, as well as a complete reorganization of Canada’s military that would include the integration of operations, logistics support, personnel, and administration of the separate branches under a single functional command system.  This unification occurred on 1 February 1968, when all three armed services were merged into the new Canadian Armed Forces

SIU Crest
​The initial amalgamation of all police and security elements of the CF was first effected in October 1964 by the formation of the Directorate of Security at Canadian Forces Headquarters.

​By April 1966, the security staffs and Provost Marshals in existing single service command organizations were eliminated, the command and base security officers were appointed at the newly formed HQs and the various investigative elements of the Services were amalgamated into a single organization called the Special Investigation Unit (SIU).​ 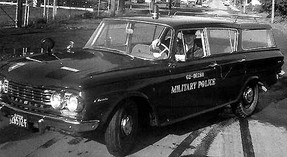 C Pro C on patrol, circa 1966. (Photo: Unknown)
To achieve a common approach throughout the forces, security and police functions were regrouped into three main categories: (1) personnel security, (2) police and custody, and (3) security of information and materiel.

​A single trade of Military Police was created to replace previous five trades, and provided  standards for the training required of all non-commissioned members employed in the police and security field. 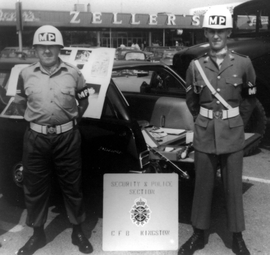 C Pro C public relations in Kingston, ON, circa 1966. (Photo: Unknown)
In June 1966, Major General Turcot was directed to examine the role, organization and responsibility for Security in the CF and to make recommendations for any revisions. At the time of the TURCOT report, there existed two philosophies in the Police, Intelligence and Security organizations. The Director General Intelligence (DGI) saw a distinction between Police and Security but with a closer relationship between Security and Intelligence. The Chief of Personnel saw the Police and Security functions as complimentary.
​
The TURCOT report, completed on 22 July 1966 directed that the responsibility for Security should be placed under the DGI. In January 1967, the CDS directed DGI to undertake a management analysis with a view to recommending the future management system for Intelligence, Security and Military Police in the Canadian Armed Forces. This study became known as the PIQUET report.

The DGI Working Group submitted its study in March 1967 in which it was concluded that the security, intelligence, and police functions should all be managed as an entity under a Directorate General Intelligence and Security in the VCDS Branch. The new Branch was to be named the Security Branch, which officially was created on 1 February 1968. 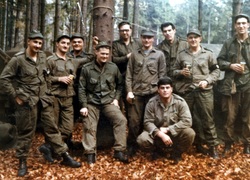 MP on exercise in West Germany, circa 1968. (Photo: Jean-Guy Plante)
The recommendations of the PIQUET Study were implemented by the CDS on 3 May 1967.  By 1968, the Officer specifications were in draft form and included five sub-classifications: 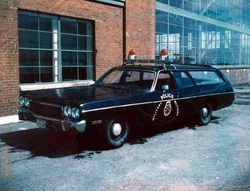 Patrol car, circa 1975. (Photo: Unknown)
In June 1975, the Director Military Occupational Structures (DMOS) issued a draft occupational analysis report on the Security Officer classification in which it was found that the activities performed by Sec(Int) officers bore little resemblance to those performed by Sec(MP) officers. The Branch was restructured into two classifications vice the five sub-classifications that existed at the time. By August 1975 after another review, DGIS rejected the idea of two separate classifications within one Security Branch and proposed one classification for Military Police and one for Intelligence.  The dual structure also formalized and clearly defined the uniqueness of the Police and Intelligence functions and institutionalized the security function in the police side of the structure as had been the RCAF practice. 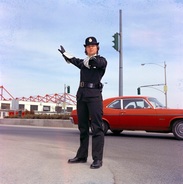 Directing traffic at CFB Trenton, circa 1978. (Photo: DND)
In 1978, the CRAVEN Report recommended the separation of MP and Intelligence personnel from the unified Security Branch, and the reorganization into a structured Security Branch and a new Intelligence Branch. Following further studies, discussions and recommendations, DGIS concurred with the CRAVEN Report and

The Thunderbird has been the symbol of Military Police in the Canadian Armed Forces for more than 45 years.

In 1967, with unification of the three armed services into a single organization on the horizon, as well as the formation of a unified Security Branch the Insignia Steering Group (ISG) recognized a need to replace the previous corps and service badges used by various policing entities since World War 1.

​After studying various proposals, the ISG recommended the use of the aboriginal totemic Thunderbird as the symbol for the newly-created Security Branch.  The reasons for this decision were rooted in the oral histories of the aboriginal peoples of Canada’s Pacific Northwest

Security Branch crest
“The thunderbird is a mythical aboriginal spirit, probably derived from the eagle, whose name signifies the voice of thunder.  It is one of the most common emblems of the Northwest Coast aboriginal tribes and is often the crowning figure on carved totem poles before the chief’s house.  It is believed to be a symbol of supremacy and power in the life of the tribe.  The mystique surrounding this emblem varies according to the legends of the tribe concerned.  The common features of its attributes, however, concern its role as a protecting spirit, one who gives wise counsel and guards the tribe from evil and misfortune.  The face on the breast symbolized dual transformation.  These attributes make it an appropriate symbol for the Security Branch of the Canadian Forces.  It is a bold and striking emblem, distinctive in appearance and identifiably Canadian.”
NOTE​:​  Since first publishing this account of the history of the Thunderbird as the official emblem of the Military Police, we've learned that Major William B. Stoker, a Military Police Officer, was also involved in the selection of the Thunderbird and design of the Branch crest.

With few official written records available to us from this era, we are always looking for ways to improve our knowledge of the historical facts.  To ensure proper credit is given to all those involved, and to help widen the historical record on this important even in Military Police Branch history, our History and Heritage team are working to develop a deeper understanding of the history of the MP Thunderbird and to flesh out the historical record.

MP at CFB Comox, circa 1999. (Photo: DND)
Following a sweeping overhaul of the National Defence Act and the Code of Service Discipline ​resulting from the DICKSON Report, military police were given new powers and responsibility:
In recognition of these changes, in 1999 the Security Branch was renamed the Military Police Branch. 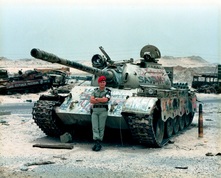 MP in Kuwait after the first Gulf War, circa 1991. (Photo: Andrew Lullwitz)
Over the last 75 years, MP have carried out their duties with great distinction and valour throughout the world and in every theatre of operation since World War 2, including the Korean War; United Nations peacekeeping operations in Egypt, the Congo, Cyprus, the Golan Heights, and the former Yugoslavia; 45 Embassies and High Commissions in foreign countries; and have deployed in support of numerous humanitarian responses around the world.  Most recently, MP deployed in a variety of combat and training roles during operations in Afghanistan.

MP at ASU Gagetown, circa 2013. (Photo: DND)
Today, the Military Police Branch is composed of approximately 2,230 Regular and Reserve personnel.  MP serve on every base and station of the Canadian Armed Forces in Canada, and are deployed throughout the world on operations with our NATO allies.  From its humble beginnings, the MP Branch has evolved into a modern, accredited police service that is highly respected by the Canadian law enforcement community, as well as its international peers.
On June 15th, 2015, the Military Police Branch celebrated its 75th Anniversary.  The date coincided with the formation of the Canadian Provost Corps, an act that would lead to today's Military Police Branch.