Looking Back: The Thunderbird Badge

By Lieutenant-Colonel Paul Thobo-Carlsen (Retired), CMPA Director of History & Heritage.
The Insignia Steering Group was chaired by Major William P. Stoker (Canadian Provost Corps) and its members were Major David W. Wiens (Canadian Intelligence Corps), Flight Lieutenant D.J. Currie (Royal Canadian Air Force) and Lieutenant G.E Van Sickle (Royal Canadian Navy). After studying many submitted proposals, the ISG recommended the totemic Thunderbird as the unifying symbol for the Security Branch.  Maj Stoker, who personally briefed the dozen or so submitted proposals to BGen Kenyon and his insignia selection committee, later stated that the Thunderbird concept was a “slam dunk” since it was the only submission that fully met DGIS’ criteria that the new badge must not incorporate any symbols used by previous military police or intelligence organizations.[3]
In choosing the Thunderbird, the fledgling Canadian Forces Security Branch would have a symbol that:
​The following explanation of the Branch Badge symbolism accompanied the heraldic artwork when it was forwarded to the Governor General for the Queen’s approval:
In June 1976 the CDS approved an accompanying Branch flag incorporating the Thunderbird crest on a background of scarlet red and white.[17] The original heraldic description of this flag is, “Argent, a pale gules charged with the Security Branch badge proper.”
In 1982 the intelligence occupations were separated from the Security Branch to form a new Intelligence Branch, which then adopted its own unique badge. The Thunderbird badge and the flag were retained by the Military Police Branch when it was renamed in early 2000.[18] 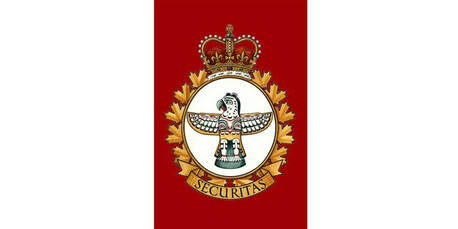 Security Branch flag – 1976 to 1999
Military Police Branch flag – 2000 to present
Additional information on the Military Police Branch badge can by found on the Canadian Heraldic Authority website at:
http://reg.gg.ca/heraldry/pub-reg/project.asp?lang=e&ProjectID=2069&ShowAll=1
----------
​Notes:
​1.  Department of National Defence, memorandum from Director General Intelligence and Security, V1901-72 (DGIS/INT S4), 15 May 67.
2. At the time, the term “Security Branch” had not yet been approved and come into general use. Instead, the organization was informally being called both the “Security Service” and “Security Services.”
3.  Major (Ret’d) William P. Stoker (Insignia Steering Group Chairman), in telephone discussion with Lieutenant-Colonel (Ret’d) Paul M. Thobo-Carlsen, 22 June 2017 and email correspondence between the two on 23 Jun 2017.
4. Lieutenant-Colonel David Wiens, letter to the editor, SECURITAS: The Journal of Canadian Security, Vol 1, No. 2 (Spring 1969): 4-5.
5. Harold A. Skaarup. Out of Darkness–Light: A history of Canadian Military Intelligence, Vol 1 (Lincoln NE: iUniverse, 2005), 391.
6. Major (Retd) William P. Stoker, in telephone discussion.
7. Department of National Defence, letter from Vice Chief of Defence Staff to Chief of Defence Staff, Inauguration of Security Service, V 1901-72 (DGIS), 20 July 1967.
8. Office of the Governor General, letter from the Assistant Secretary of the Governor General to the Minister of National Defence, 10 April 1972.
9. British Columbia Provincial Museum, letter from Curator of Ethnology (Peter L. MacNair) to Director Ceremonial, May 23, 1968.
10. The CMPA had previously written that the “Hoho” Thunderbird painting by artist C.B. Greul may have also served as inspiration for the branch badge. However, further investigation of DND records has uncovered no evidence to support this. According to the University of British Columbia Museum of Anthropology, C.B. Greul was a non-indigenous artist who appropriated the Northwest Coast First Nations art style and his works reflect a lack of training in the art’s form and cultural meaning (http://collection-online.moa.ubc.ca/search/person?person=1066&tab=biography). Available DND documentation from the 1967-72 period only mentions the art works of Henry Hunt and Chief Mungo Martin (both of the Kwakiutl First Nation) as having been studied by DC staff when finalizing the branch badge design.
11. Department of National Defence, minute sheet from D Int S-4 (Lieutenant-Colonel D. Wiens) to Director Ceremonial, untitled, 29 Aug 67 and Department of National Defence, minute sheet from D Int S-4 to Director Ceremonial, Security Badge - Thunderbird, 11 Dec 67.
12. Letter from Chief James Sewid (Kwakiutl Chief) to Director Ceremonial, May 24, 1968.
13. Department of National Defence, letter from Director General Intelligence and Security to Director Ceremonial, Security Services Insignia/Badge, V 1901-72 (INT S-3), 28 October 1968.
14. Department of National Defence, letter from Director General Intelligence and Security to Director Ceremonial, Security Services Insignia/Badge, V 1901-72 (DGIS), 20 December 1968.
15. Department of National Defence, letter from Minister of National Defence to Governor General, March 13, 1972 (badge description contained in an attachment to this letter entitled “Security Branch”).
16. The face on the Thunderbird’s breast is that of a whale.  This was pointed out by Chief Sewid in his reply letter to Director of Ceremonial (see note 12).  He mentioned that in the Kwakiutl tradition, such a face signifies the owner’s clan crest. He felt this was most appropriate since it could signify that the Armed Forces covered not only the land and air elements, but also the sea. In “History of the Military Police Thunderbird Badge” at www.canadianprovostcorps.ca/story-21.htm, Major (Ret’d) Stoker and Chief Warrant Officer (Ret’d) Powell elaborate that the dual transformation aspect of this face alluded to the dual roles assigned to the Security Branch, and was meant to symbolize both its overt and covert operations.
17. Lieutenant-Colonel D.R. Johnson, ed., On Guard of Thee: The Silver Anniversary of the Security Branch (Winnipeg MB: Jostens Canada Ltd), 57.
18. The Armed Forces Council’s approval of the Branch name change is recorded in AFC 1/100 Record of Decision, Item VI, 18 Jan 2000.