By Lieutenant-Colonel Paul Thobo-Carlsen (Retired), CMPA Director of History & Heritage.
​The motorcycle has a long and storied history with Canada's military police. While motorcycles are no longer used by the Canadian Armed Forces, they were an important means of transportation for members of the Canadian Provost Corps (CProC) for almost three decades and continued to be used by some military police (MP) units, albeit in much smaller numbers, until the 1990s.
Although Canada first began using motorcycles for military purposes during the First World War (1914-1918), no evidence has yet been uncovered to suggest they were employed by our military police, whose primary modes of personal transportation during that war were horses and bicycles. However, during the Second World War (1939-1945) motorcycles were a key enabler for our service policemen.
A former Canadian Army Provost Marshal, Colonel L. H. Nicholson, recalls that for provost traffic control duties motorcycles were "unsurpassed for mobility—getting from one point to another quickly, running up and down the long line of a convoy to unravel traffic snarls or direct the removal of broke-down vehicles or in performing the innumerable other tasks of a 'shepherd'. "[2]

Canada employed a wide variety of US and British-built motorcycles during the Second World War. CProC troops are known to have used machines from Harley-Davidson, Indian, Norton, Matchless and Birmingham Small Arms (BSA). The two models most widely ridden by Canadian provosts overseas were the Harley-Davidson WLC and the Norton 16H: the former featuring a 750cc (45 cubic inch) V-twin engine generating 25 horsepower, and the later employing a 500cc single-cylinder engine making 13hp.
​For provosts serving in Canada, larger displacement US-built motorcycles predominated throughout the war. These bikes were powerful and well suited for use on paved roads, although they were also quite heavy and could be challenging for novice riders to handle. The Harley-Davison WLC model also proved popular with Canadian provosts serving in England, who generally operated on well-prepared road networks. However, the Canadian Army also purchased large numbers of British-built motorcycles, particularly the Norton 16H. The smaller and lighter British 'singles' had several advantages for wartime use overseas: they were more forgiving for novice riders; were easier to handle while riding off-road or on poorly maintained surfaces; were simpler to maintain; and had a shorter supply chain for spare parts. As a result, the provost companies supporting combat formations in forward areas generally operated British-built motorcycles. However, as combat in northwest Europe wound down in 1945, some Provost Companies began re-adopting the Harley-Davidson WLC. 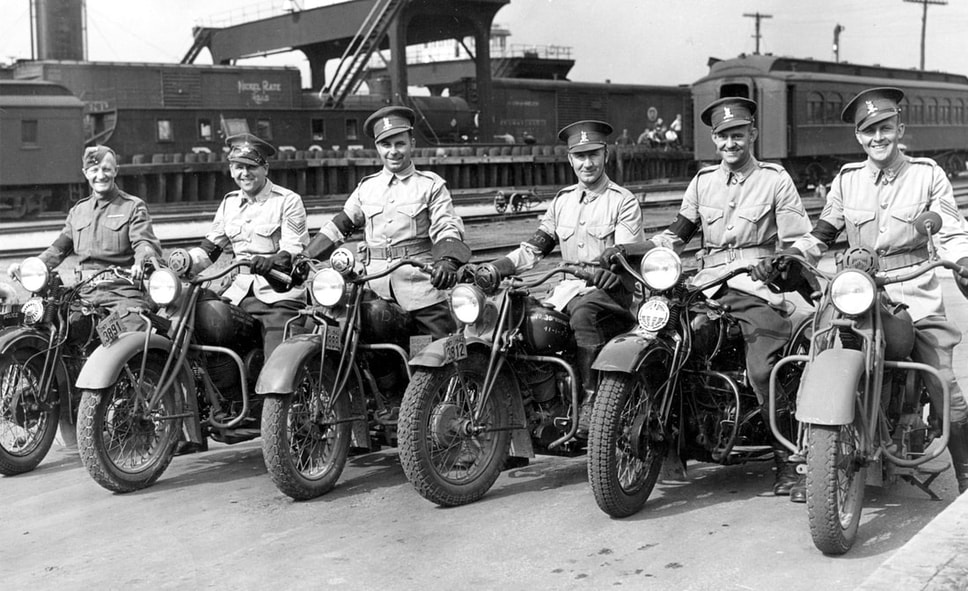 CProC motorcyclists from a Home War Establishment unit, No. 30 Provost Company, London, Ontario, 1942 (Photographer unknown/via Canadian Provost Corps Association). The five riders on the right are wearing pre-war style ‘Khaki Drill’ uniforms, while the leftmost rider is wearing the newer 1939-pattern ‘Battledress’ uniform. Note that helmets were not yet mandatory for military motorcyclists in Canada at this stage of the war.
Close inspection of the above photo shows three motorcycle types. From left to right: provosts number 1 and 5 are riding Harley-Davidson model VL bikes (1200cc v-twin engine); number 4 is riding an Indian Scout (500cc v-twin); and numbers 2, 3 and 5 are riding Indian Chief motorcycles (1200cc v-twin). The two Harley-Davidson bikes retain their glossy paint and chrome trim, and none have blackout lights, suggesting that some or all of these machines were civilian models pressed into military service rather than military-production models. 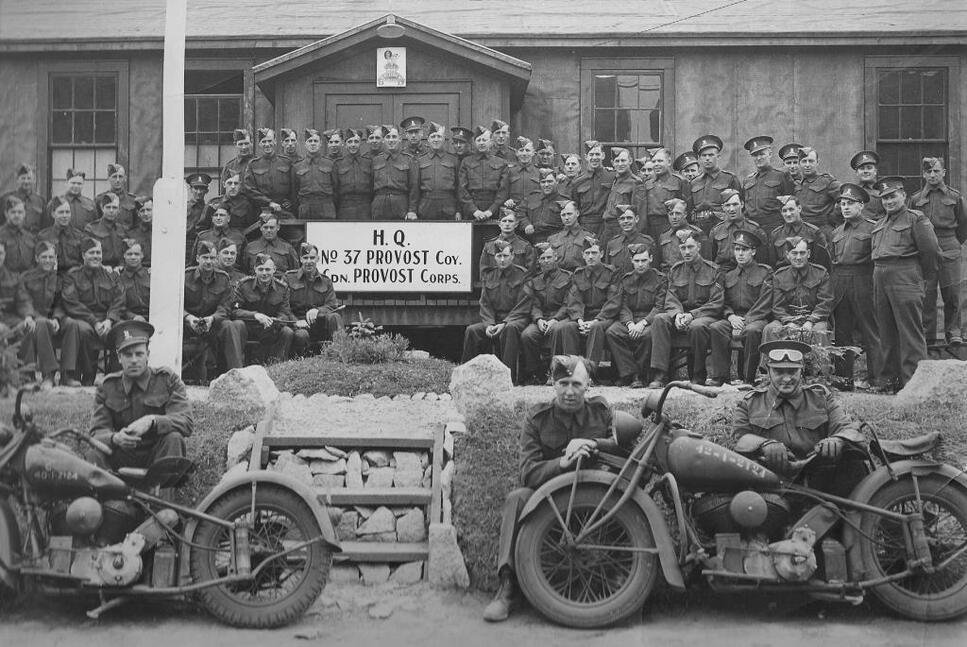 No. 37 Provost Company staff, Halifax, Nova Scotia, circa 1942-45 (Unknown photographer/via Robert G. Thomas). These two motorcycles appear to be military versions of the Indian Chief, known as the Model 340. 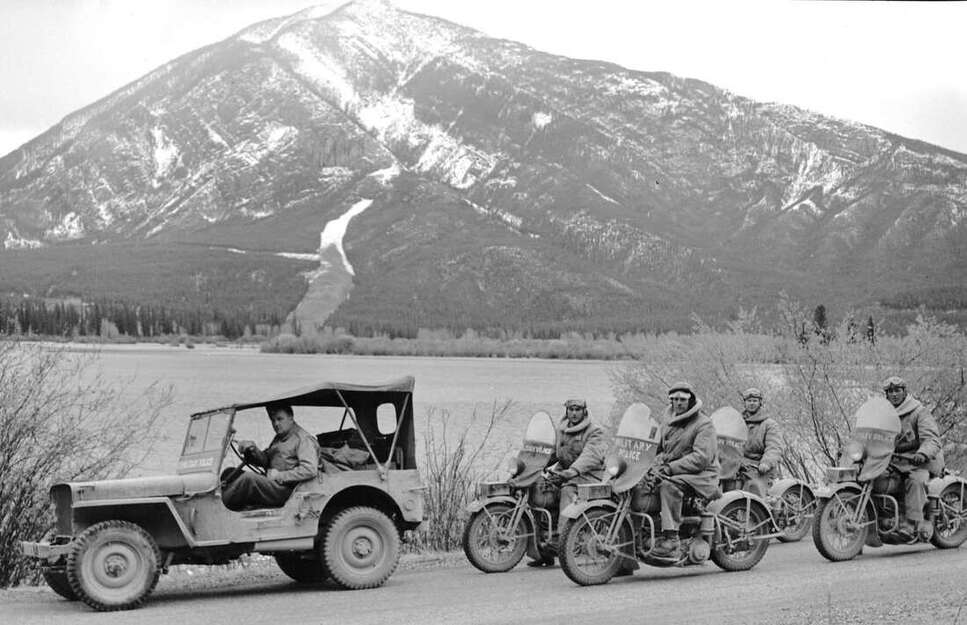 As hostilities ceased in Northwest Europe, most CProC elements on the continent began swapping their British-built singles for the more powerful Harley-Davidson WLC motorcycles. Many of these bikes were repainted white to help increase visibility in support of post-war policing duties.
While the heyday of military motorcycles had now passed, their utility for some military police duties lingered into the post-war period. A significant number of Harley-Davidson WLCs were retained by the Canadian Provost Corps and issued to both regular and reserve units in Canada. Motorcycles continued to play a central role in CProC recruiting ads well into the 1960s—appealing to the adventurous spirit of potential recruits (see Service Police Recruiting Ads). However, by the mid-1950s, the old wartime WLCs were well past their prime.
In 1957, the Canadian Army bought a number of Triumph TRW motorcycles featuring 500cc vertical twin-cylinder engines and producing 18hp. The majority of these lightly militarized TRWs were allocated to signals units for Dispatch Rider duties, while a smaller number were issued to CProC units. This was not a one-for-one replacement for the retiring WLCs, so the overall number of provost motorcycles declined. The TRW was essentially a modified street bike without blackout driving lights, so its usefulness for military police duties in the field was not great compared to the now-plentiful jeeps. However, some provost TRWs soldiered on for another decade for patrol, escort and traffic control duties.
By the time of the Canadian Armed Forces' (CAF) unification in 1968, most TRW motorcycles had been removed from active service. However, a short renaissance began in 1977 when the CAF purchased around 75 domestically built Can-Am 250 motorcycles from Bombardier. These lightweight bikes had 250cc two-stroke engines making 26hp, and represented a huge leap in off-road performance from any previous military motorcycle in Canada's inventory. They were essentially militarized Can-Am TnT (Track 'n' Trail) 250 bikes with sufficient lighting to make them street legal. Their use by military police was restricted to field platoons—and only as a limited complement to these platoon's jeeps.
In 1985, the CAF began the purchase of 86 new Armstrong MT500 motorcycles to supplement and replace the Can-Ams. Armstrong-CCM Motorcycles in the UK had earlier acquired the rights to an Italian design called the SWM XN Tornado and developed it as the MT ("Military Transport") motorcycle. The MT500 put out 32hp and by most accounts was a very capable motorcycle. 4 MP Platoon in Germany was likely the last Canadian MP unit to operate MT500—employing them until the unit was stood down in 1992 as part of the Canadian Forces' withdrawal from Europe. The CAF then purchased 77 militarized Kawasaki KLR 250cc machines beginning in the mid-1990s, and some are know to have been used by 5e Peloton de Police militaire (5 MP Platoon) based in Valcartier, Québec. It is unclear if KLR 250s were used by any other MP units in Canada. In any event, the CAF soon decided to drop this form of transportation and by 2003 had disposed of its entire motorcycle inventory. 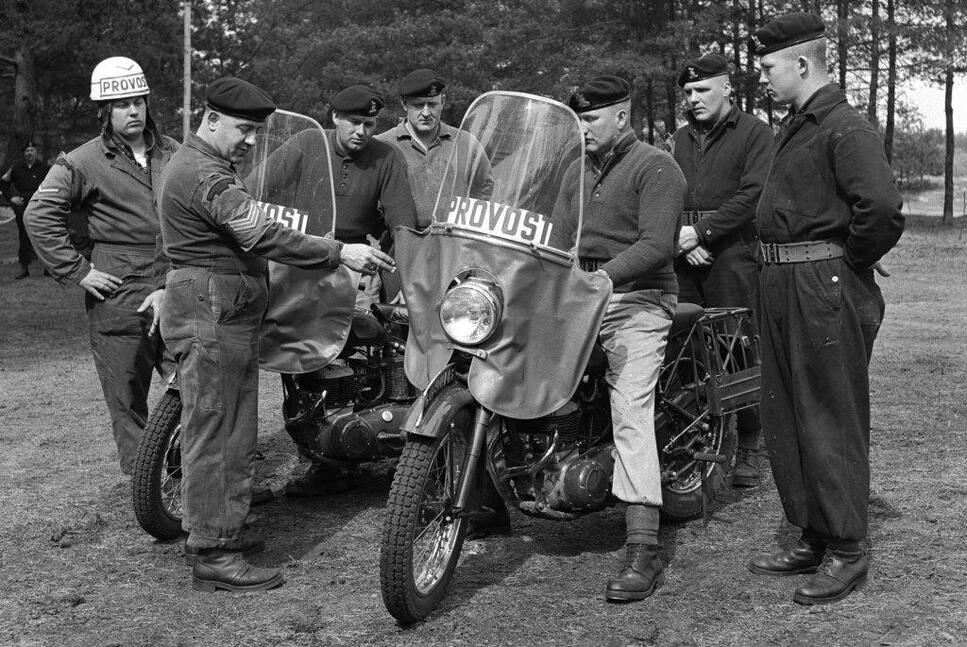 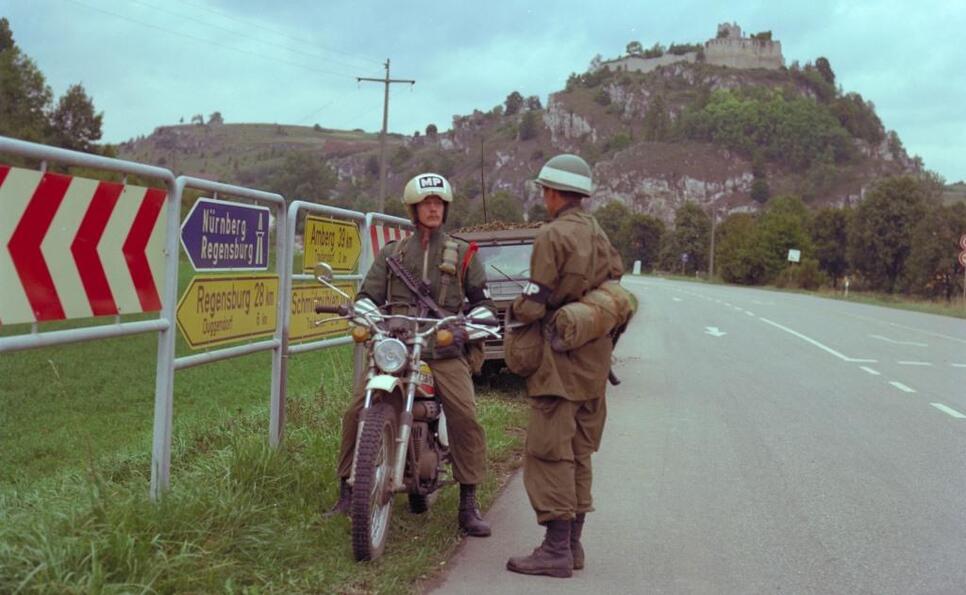 Military Police motorcyclist from 4 MP Platoon on tactical manoeuvers in West Germany, 1976 (DND, ILC76-821). Note the civilian 'TnT'-style paint scheme on this Can-Am 250 bike. This photo was taken a year before the main Can-Am deliveries began, so this is almost certainly a pre-contract trial bike. 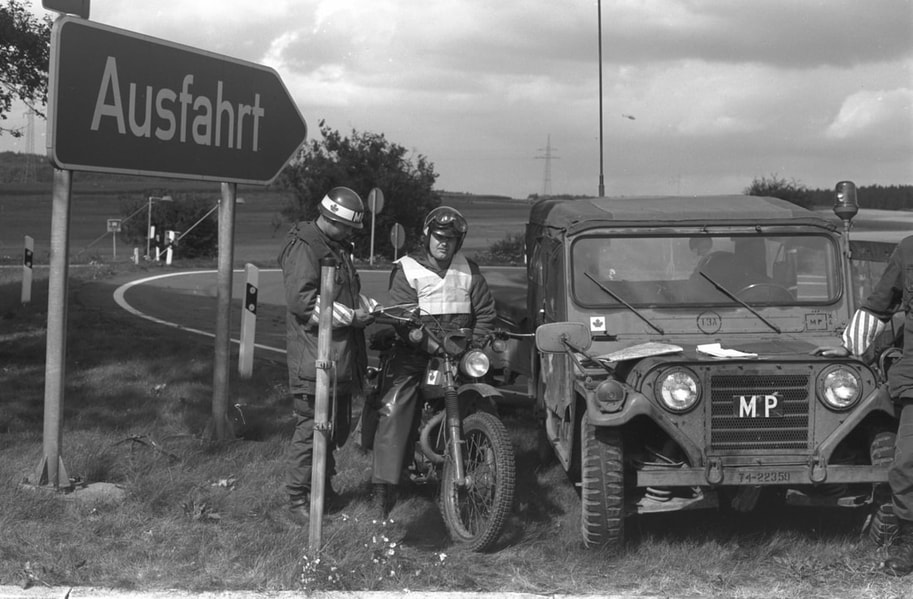 Motorcyclist from 4 MP Platoon confers with his jeep-borne colleagues during an exercise in West Germany, 1979 (DND/IL79-854). 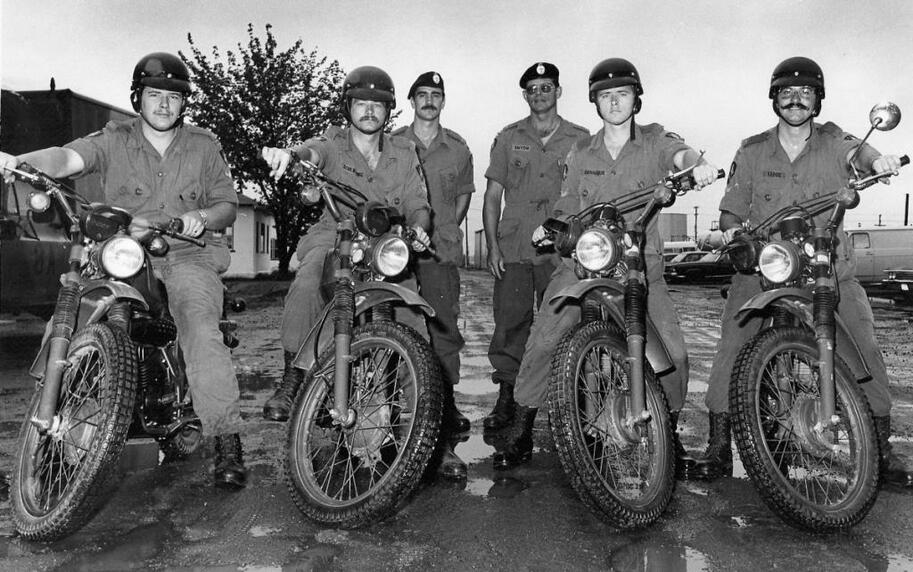 2 MP Platoon motorcycle training course for the Can-Am 250s at CFB Petawawa, Ontario, circa 1980 (Unknown photographer/via Robert G. Thomas).
----------
​Notes:
​1. Andrew R. Richie, Watchdog: A History of the Canadian Provost Corps (Toronto: University of Toronto Press, 1995), 18 and 24.
2. L.H. Nicholson, Battle-dress Patrol: No. 1 Provost Company (R.C.M.P.), 1939 - 1945 (Ottawa: Access to History Publications, 1992), 3. Leonard Hanson Nicholson joined the Canadian Army from the RCMP in 1941 and eventually attained the rank of colonel. He served as Canadian Army Provost Marshal from October 1945 to April 1946. After returning to the RCMP, he rose within its ranks and served as Commissioner of the Force from May 1951 to April 1959. He was subsequently appointed Colonel Commandant of the Canadian Provost Corps in March 1960 and served in that capacity until the Provost Corps was absorbed into the unified Canadian Armed Forces. He became an Officer of the Order of Canada on 6 July 1967.
3. Clive M. Law, The Canadian Military Motorcycle (Ottawa: Service Publications, 2010), 153.
​4. LAC captions this photo as "Despatch riders of the 2nd Canadian Infantry Division..." in its online catalogue at: http://central.bac-lac.gc.ca/.redirect?app=fonandcol&id=3225473&lang=eng. However, the "79" unit signs and white traffic control gauntlets clearly identify these as being provost motorcyclists. Lance-Corporal Stake was one of 41 provosts from No. 2 Provost Company who landed in Dieppe during the ill-fated raid on 19 August 1942. He managed to evade death, wounds and capture that day, and was one of only 22 unit members able to embark back to England. Stake was still serving in that provost unit when 2 Canadian Infantry Division liberated Dieppe on 1 September 1944.
​5. Military policeman Gilles Guilbault later attained the rank of chief warrant officer. In the latter part of his career he served in several senior out-of-Branch positions, culminating with his appointment as the Air Command Chief Warrant Officer.