Looking Back:  The CProC at Dieppe

By Lieutenant-Colonel Paul Thobo-Carlsen (Retired), CMPA Director of History & Heritage.
The main provost task soon turned to personal survival and helping protect fellow soldiers during the chaotic withdrawal. A number of provosts manned machine guns to replace fallen crewmen and otherwise fought as best they could alongside the infantry and engineers near the sea wall. One period newspaper reported that "The battle of the sea-wall was one of the grimmest of the entire operation."[2] 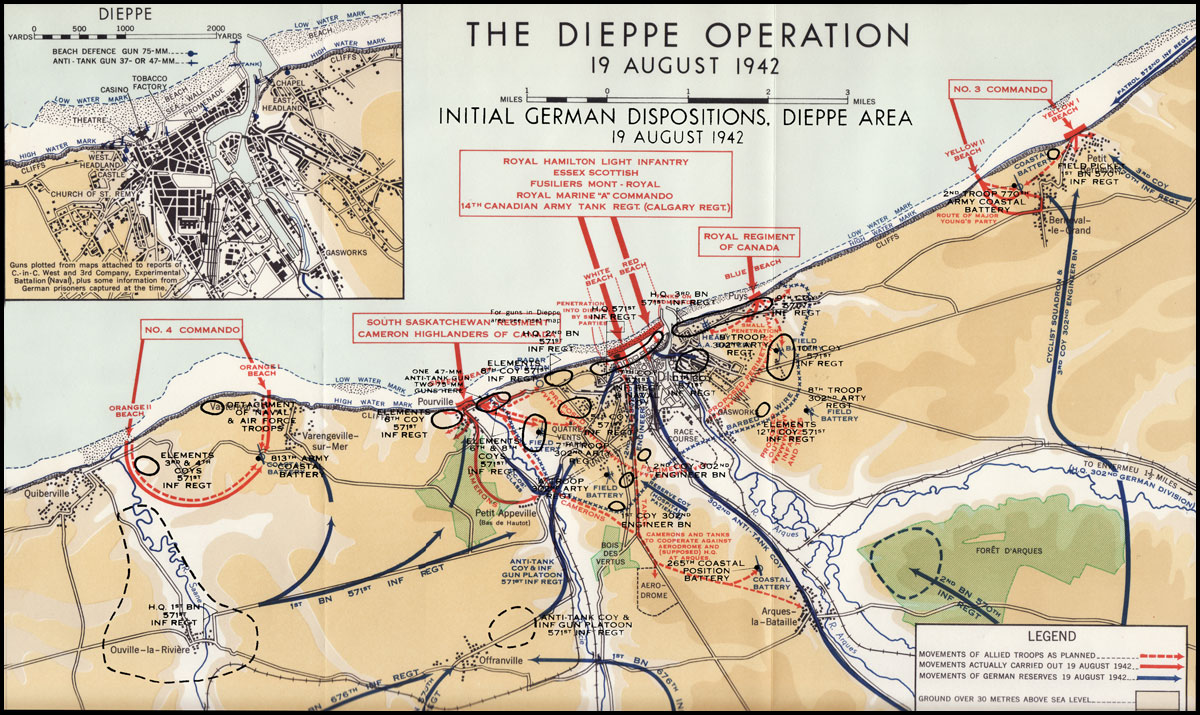 The CProC contingent from 2 Pro Coy landed at the White and Red Beaches along with the tanks of the 14th Cdn Tank Regt (Calgary Regt). The sea wall area where many provosts took refuge and fought is shown in the inset (Map Credit: DND/C. P. Stacey, Official History of the Canadian Army in the Second World War. Volume I, Six Years of War: the Army in Canada, Britain and the Pacific, map 5)
While indeed lucky to be alive, the 18 provosts who were captured in Dieppe faced years of loneliness and privation in German POW camps. At least seven of them were wounded during the raid, some seriously.
Shortly thereafter Corporal Prouse was wounded by an exploding mortar shell. Fortunately, his steel helmet prevented a potentially fatal head wound and he described feeling a new-found respect for what he previously distained as his 'God-damned tin hat.'[6] After being evacuated to a hospital at Rouen-sur-Seine, where his own shrapnel wounds were treated, he was pressed into service at this hospital where one his duties was to hold down other allied prisoners as they were operated on. He recounts that, "We were the anesthetics, one for each arm and one for each leg. Either there were no anesthetics or the Germans did not want to waste them on us.[7]
Corporal Prouse regained his freedom on 11 April 1945 when troops of the US 3rd Army liberated his POW camp. Almost immediately, he began rounding up his former guards and escorting them to a temporary compound that was set up to collect these new German POWs. The tables had finally been turned.
All members of No. 2 Provost Company who were taken prisoner in Dieppe survived the war.
Dieppe was the first offensive battle of the Second World War in the which the Canadian Provost Corps took part. No. 2 Provost Company could rightly claim its 'baptism by fire' at Dieppe, and its members certainly enjoyed an additional measure of satisfaction when they eventually helped liberate the city in September 1944.