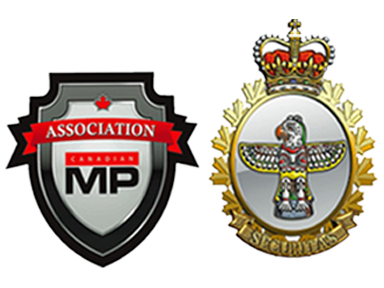 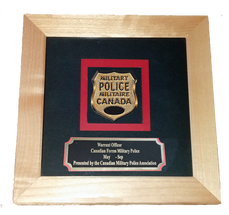 ​
To recognize a member’s service to the Military Police at the time of release or retirement from the Canadian Armed Forces (CAF), members of the Canadian Military Police Association (CMPA), whose membership is in good standing, may receive a Departure Gift to commemorate their service​.
​
Some restrictions may apply.  ​
Types of Departure Gifts
CMPA members of the Regular and Reserve Force, who were entitled to MP credentials during their military career, and who release or retire, may be presented with the CMPA Departure Gift of the following design:
The CMPA Departure Gift should not be confused with the new CMPA Retirement Credentials which is a Retired or Veteran Badge in a wallet.

How to Apply for the CMPA Departure Gift

Error in the Gift Plaque
Every attempt is made to ensure that the wording on the gift is correct. If a plaque or inscription is improperly worded by the CMPA, then the CMPA will replace the plaque at no cost to the member.  If the error is attributed to the member incorrectly completing the requisition form, then a replacement plaque may be made at the retiring member’s expense.
Replacement plaques may be ordered through the CMPA MP Kit shop online store.
More Information
For more information in relation to the CMPA Departure Gift, go to CMPA By Law number 5 - click here